I am using the openECA to perform the angular difference of phase A between two devices using the C#. (I know that such function it already implemented in the actions adapters of the manager, but I need to perform this in C# because other functions will be implemented). 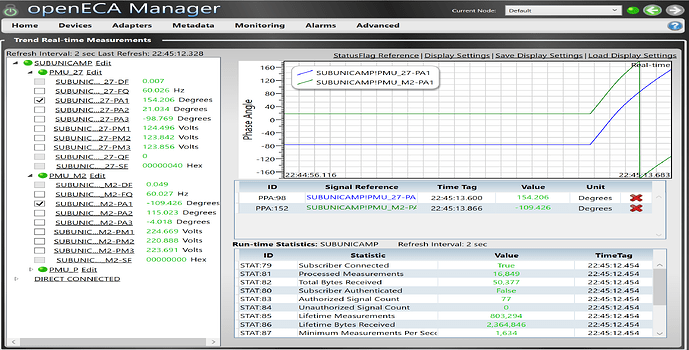 The project in C# was not able to compute the angular difference receiving the angles in a alternating form, ie, not receiving the two measurements at the same time, making the other measurement zero.

So my theory is that the input mapping is not aligning the time-tags to perform the operation.

How do you propose to solve the problem? The input mapping was supposed to handle alignment of the time-tags right?

What is your frame rate setting for the calculator as compared to the incoming PMUs? Could be that it doesn’t match that of incoming PMU data and the data is being sorted into different sized buckets. 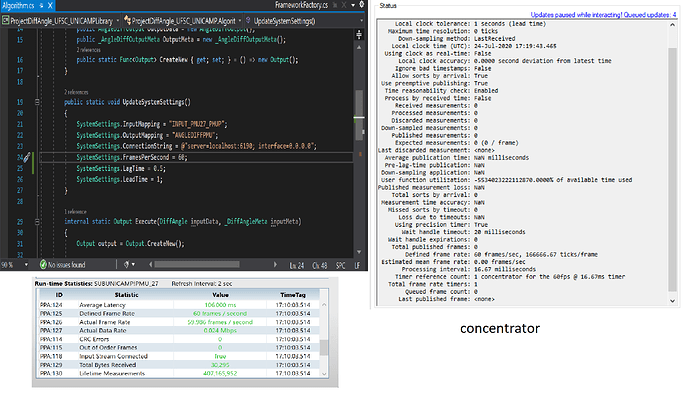 As presented, the incoming frame rate (60frames/second) is equal to the frame rate settings (60).

But one thing that I find very strange was that the Estimated mean frame rate is 0.00 frame/sec in the concentrator. However, this also happened to my previously described example using TESTDEVICE and the c# project is receiving the data and computing the angular difference with no problem.

Thanks for the reply, Orlem