I try to connect, simulate my SIEMENS SIPROTEC 5 device and PMU Connection Tester.

To demonstrate my device function (PMU), I think PMU Connection Tester is the best option.

However, Contrary to my expectations, I am failing in the operation of PMU Connection Tester. 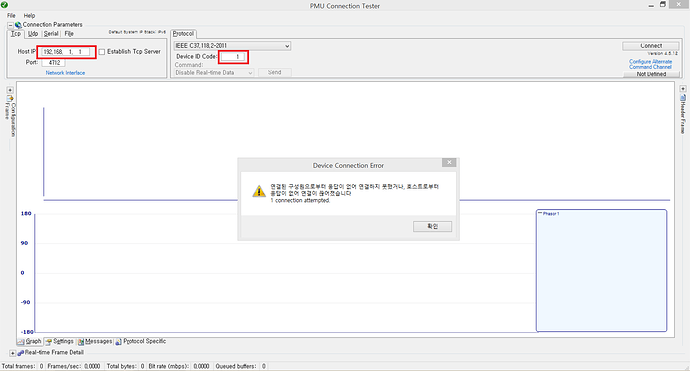 I have properly set the device’s IP and port to PMU Connection Tester, but the connection is failing.

So, I want to check if there are any problems with what I have done.

Please give me advice.

Try going to the “Settings” tab and setting “ForceIPv4” to “True”.

Thanks for your answer.
However, I have already done it.

It can be confirmed in the attached picture above.

Can you translate error message into English?

I’m Sorry.
I didn’t translate because I thought the phrase at the top of the pop-up was not important.

For reference, the ping test had no problems.

That sounds somewhat similar to the error message for a timeout. Those typically occur because packets are blocked by a firewall. Does the PMU have a local firewall? Did your ping test determine whether TCP port 4712 is open to the PMU system? Is 192.168.1.1 the correct address for the PMU (it looks like a router address)?

Thank for your answer,
i answer what about you mentioned.

Does the PMU have a local firewall?
=> The used PMU is a device and there is no firewall on it.

Is 192.168.1.1 the correct address for the PMU (it looks like a router address)?
=>The current IP was assigned for testing purposes, not for actual purposes.

Did your ping test determine whether TCP port 4712 is open to the PMU system?

=>I lack a lot of network knowledge.
I’m afraid it will hinder my understanding of the things you have presented.

To confirm this, i checked port 4712 and other port using ‘TCPING’. 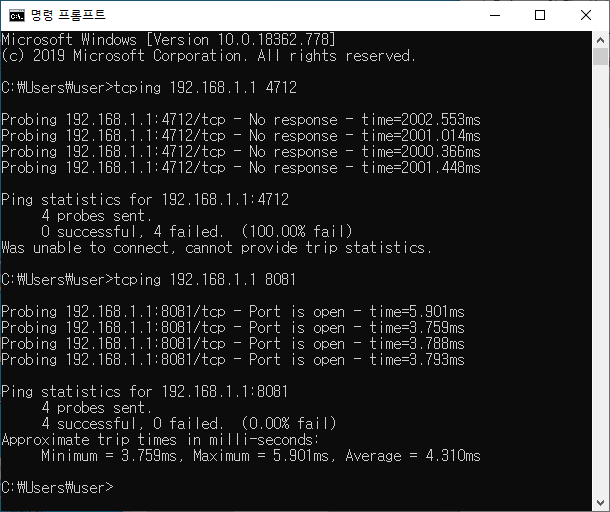 However, Before I did this, I set port 4712 in the inbound rule. 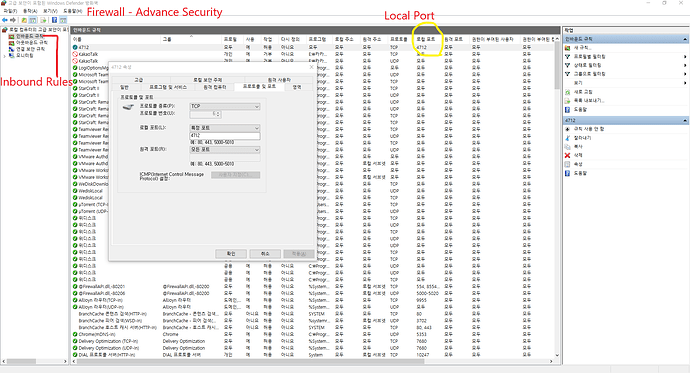 Could you please give me your advice again?

To make the connection to the PMU on port 4712, your system must send an outbound packet to the device. This will be allowed by Windows Firewall by default. Your system will not be needing an inbound firewall rule.

It looks like tcping is corroborating the error message from PMU Connection Tester. If a firewall is allowing packets but the device is not listening, you will normally receive an RST packet rather than simply timing out with no response. That’s why I say it’s highly likely that there is a firewall blocking that port. However, things can get a little muddled if the device has its own local firewall that it manages. For instance, Windows Firewall has a feature that allows port rules to be set up on the fly by trusted applications when the port is opened. In that case, if the application is not listening on the port, rather than having the OS send an RST packet in response to connection requests, Windows Firewall would drop the incoming packet and the receiving application would time out. Therefore, without knowing more about your network or the PMU, it’s difficult to say whether this is a PMU configuration issue or a firewall configuration issue, but there is almost certainly a firewall somewhere blocking the PMU Connection Tester’s packet.